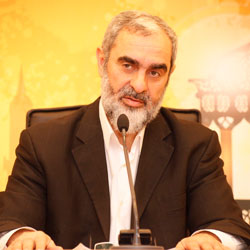 He was born in the district/county of Trabzon. He acquired  his basic religious education from his father Hilmi Yildiz Hocaefendi (Shaykh) and became a hafiz at the age of eight. He studied at Gaziosmanpasa Imam Hatip High School in Istanbul. He began writing articles and translating news weekly in various newspapers, as well as continuing to preach, while he was attending high school.

During his studies, he undertook some active duties in Milli Turk Talebe Birligi (National Turkish Students Union) and Akincilar Teskilati (Raiders Organisation). After graduating from Imam Hatip high school, he studied for one year at Marmara University Faculty of Theology. After that, he moved to Mecca to continue his education at Umm al Qura University. He graduated from the same university majoring in  Usul al Fiqh. During his stay in Mecca, he took private lessons and received an ijazah from a number of well known shaykhs of hadith including the great muhaddith Abul Fattah Abu Gudde, the great Indian scholar Abul Hasen an-Nadwi and one the last scholars of the Ottomans Mehmet Emin Sarac Hocaefendi (shaykh).

After returning to Istanbul, he began his education and civil society activities.He has carried out a number of projects in the fields of hifz and religious education in various institutions and organisations.

All his lectures and seminars can be found at www.sosyaldoku.tv(Turkish),

His answers related to marriage and family life ata www.ailehayati.com,

His copyrighted works at www.tahlilyayinlari.com.

He has translated 7 works, taken part in 3 commission researches in Islamic Fiqh and Encyclopedias of Social Sciences. He has written 35 books and currently has been working on 4 other books.